Travel to Port Isaac, Cornwall where the PBS show Doc Martin is filmed. There we meet the Fisherman’s Friends, a group of 10 men who grew up together in the same little village.

Dmae Roberts visited with the singers at their favorite pub on The Platt where many townspeople gather to hear the international group give free concerts during the summer.

For more than 15, the Fisherman’s Friends have been singing sea shanties as a group in Port Isaac, Cornwall (pictured, top left)

During the summer, the ten men give free concerts in the old harbor drawing crowds of 3000 or more.

The picturesque village has been highlighted in films and TV shows—mostly recently the popular Doc Martin series. But the Fisherman’s Friends with their masterful harmonies and lively performances remain the heart of local culture.

They started singing sea chanties and Christmas carols to raise money for charity but soon became so popular they got a major recording contract and now have a busy touring schedule.

Dmae talked with them at their ‘headquarters’ at the Golden Lion Pub in Port Isaac about what makes their style of singing unusual.

You can hear it here on PRI”s The World and see a slideshow of photos by Richard Jensen. 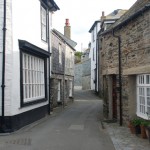 Dmae with the Fisherman’s Friends