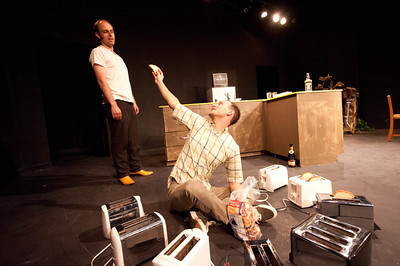 Nothing binds you together nor tears you apart like family, especially if it’s a Sam Shepard family. Our Shoes Are Red/The Performance Lab brings us True West, Shepard’s tale of sibling rivalry. Dmae talks with artistic director Devon Allen and actors Matt DiBiasio andÂ Kenneth Baldino who portray the two brothers. And in the second half, we’ll have a commentary by eastern Oregon writer Bing Bingham.Â

More about True West: Two estranged brothers haven’t seen each other for five years. Austin, a writer, aims to pen the great American screenplay, while he’s housesitting for his vacationing mom. Lee, a drifter and thief returns to their mother’s house after living in the desert for a while. The two immediately start fighting and ultimately begin working on the screenplay together amid drinking, brawling and living off toast. Â Â

Considered the final play in Shepard’s Family TrilogyÂ of plays about the myths of American life and pop culture, True West has rarely been done in Portland even though it was first premiered in 1980. All shows are at Lincoln Performance Hall, Studio TheatreÂ located at 620 SW Park Avenue,Â Portland, OR 97201.

And in the latter part of the show,we bring you a commentary from Bing BinghamÂ whoÂ Â lives on a remote ranch in northern Central Oregon where he works as an independent writer, photographer and radio producer.

You can hear Stage & Studio at: