For her second episode during Asian American/Pacific Islander month, Dmae Roberts delves into the layers of filmmaking and identity with filmmaker Devin Fei-Fan Tau. He’s reached a milestone in his career with his first feature documentary Who’s On Top?

The documentary features four diverse LGBTQ+ climbers going to the summit of Mount Hood. Only one is an experienced climber,  The film follows the four, as well as Tau and his film crew, while they train together and make the arduous climb. As an added bonus, the film is narrated by veteran actor and narrator George Takei.

Shot before COVID-19 hit, Who’s On Top?  took year to film. Each of the LGBTQ+ climbers are on not just a physical but an emotional personal journey to heal the discrimination and hate they have experienced in their lives 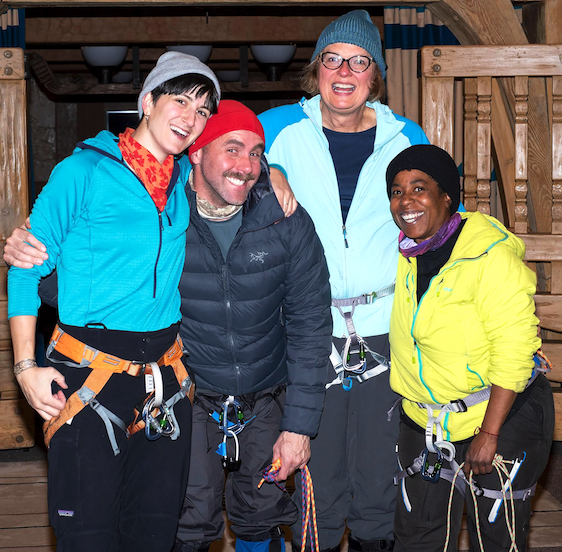 In this podcast we hear…

Devin Fei-Fan Tau, who arrived from Taiwan when he was eight years old, went a different path than his parents had expected. He has moved into his third career as a filmmaker from the world of corporate finance and retail  merchandising.

“My parents had a video store. In fact, my mom just closed it two weeks ago. They were still renting DVDs and Blu-rays in suburban LA. I think it was like a $1.99 a day. They never encouraged me to be a filmmaker or anything like that. That wasn’t part of our culture or our family culture. It was always very academically driven. You had to be a doctor, lawyer or engineer, and I was already kind of breaking the mold by going into business.  So how I ended up going to film school at PCC Portland Community College was that I was actually volunteering with Habitat For Humanity in Cambodia. And while I was there, I had the realization that I finally had the confidence and the vocabulary to tell stories. Growing up, at least in my family, you were not allowed to speak about your emotions, either happy or sad. You know, in the Chinese anthology, we have 6,000 years of stories and fables, and it’s always about duty and it’s about sacrificing yourself.” 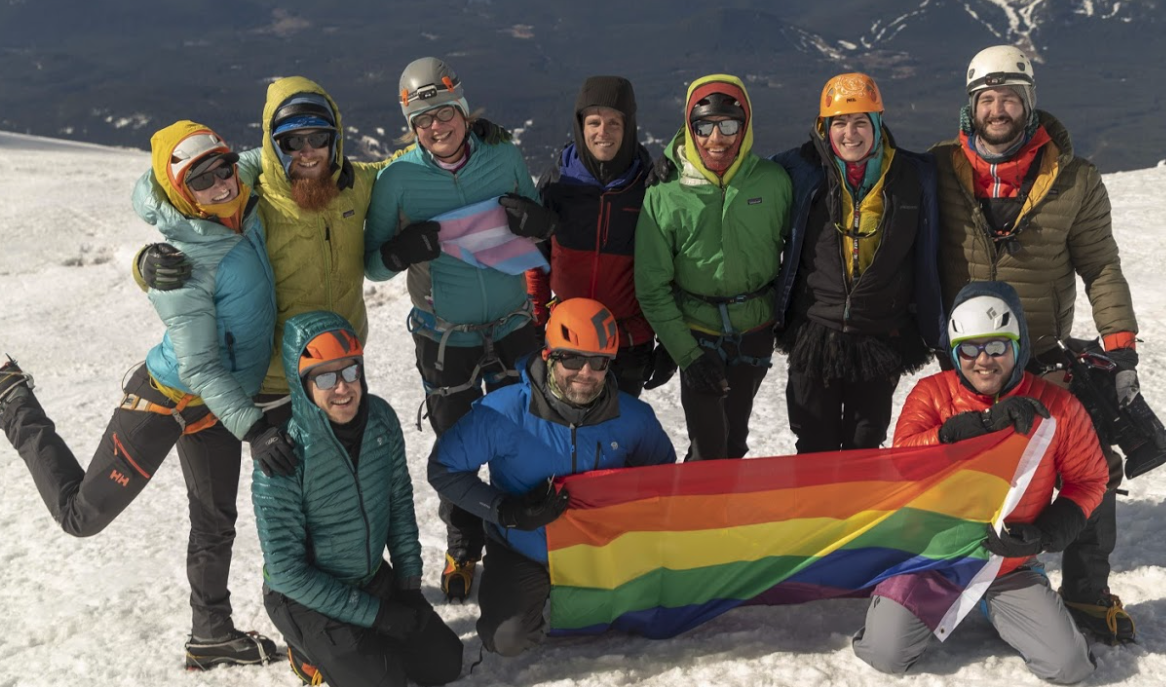 Tau also describes how he it helped he wasn’t a mountain climber before making this film.

“We shot on Mount St. Helens, Dog Mountain, all over the Pacific Northwest. So it, the scope is just humongous and not to mention the amazing four people that were featured in the documentary. I think it worked really well that I didn’t know what mountaineering was going to entail. Because had I known, I probably wouldn’t have wanted to do it or realize that the mechanics of it is very challenging. And it’s not just about carrying the cameras, directing, asking questions, and engaging everyone while we’re in the middle of climbing 5,000 feet up the mountain. We were suffering the same, you know, being thirsty, being dehydrated, dealing with altitude sickness, or being sunburnt or blistered. Mountaineering is a hard sport.”

The most moving stories are from the climbers who are describe past pain, bias and racism they’ve experienced.

Taylor Feldman (the experienced climber) who is the Outdoor Programs Manager and Lead Guide for the Mount St. Helens Institute:

“I have an uncle that voted for Trump and lives in Kansas. And my Trump voting uncle texted me and said, I’m so proud of who you are. And I’m so proud of what you’re doing and like best of luck to all of you and your friends on the climb. And I love you so much. And I just started weeping as soon as he said that I really never expected that.”

Ryan Stee, a fourth-generation Oregonian who grew up in a conservative lumber town in Central Oregon. He still lives with the pain of being targeted with hate when he was a child:

“I remember running into one of the jocks school or whatever you call it. As a person that gets startled. I mean, I kind of screamed and got really scared cause it it startled me. And from that point, the target was put on me from sixth grade all the way till my senior year in high school, it was relentless. “Faggot” and being made fun of.”

Shanita King, a BIPOC artist who uses healing arts who one day faced a threat from two men who were yelling racial slurs at her:

“The day before the 4th of July, I was painting a mural on Alberta street. Two men walked past me while I was painting and made a couple of remarks. And two hours later, the same two men come back and they’re like staggering and red-faced at this point, and reeked of alcohol. They started just saying all of these inappropriate racial slurs to me, and I felt very unsafe and uncomfortable.  And so, as I’m in the process of packing up my things, I get knocked over onto the sidewalk. His whole body slammed into mine. I immediately got up, and they were both laughing. It was very frightening. And I didn’t want to actually go back to work on my mural for like a month after that, because I was afraid.”

Stacey King, a transgender woman who is the former executive co-director of the Q Center, talks about how transphobia affected her when she was in the cardiac unit before her heart surgery.

“The heart surgeon comes in and is telling me, well, you know, we’ve found this blockage, you know, we can’t put a stint in. And so we’re going to have to do two bypasses. And my friend Elizabeth asked the doctor, what is Stacey’s diet going to?  What should she eat after she gets out of the hospital? And he said, well, he’ll be able to do this and he’ll be able to eat this. And so one of my other coworkers that was there said, wait it’s ‘she.’ Not ‘he.’ He goes, ‘oh yeah.’ ‘He’ll be able to do this. ‘He’ll be able to do that.’ I was so angry and I finally said, ‘stop.’ ‘You know, you’re messing up, right?’ And he got so flustered and said, ‘well, maybe I’m not the surgeon for you’ and turned around and walked out of the room.”

Making a full-length feature documentary has afforded more opportunities for Tau. He has two upcoming projects. One is a feature film thriller, Half Sisters, about two sisters, one is white and another is biracial, who are trapped in a cabin fending off intruders. He says it’s a thriller but also a way to talk about racial issues. Another is a commission from the federal government to create a documentary about the prison system called The Road Home. Both set to release in late 2022.

More about the film:

Who’s on Top? is a feature-length documentary that shines a spotlight on a diverse group of the LGBTQ+ community to challenge stereotypes about gender and sexuality in outdoor recreation. Historically excluded and ostracized as not belonging to the adventurer community, the climbers tackle not only a mountain, but assumptions about who they are and how they belong to the world of outdoor sports. This film portrays a journey like no other, a never-before-told story about what makes LGBTQ+ folks both distinct and connected, facing physical, mental and societal obstacles. Narrated by George Takei.

George Takei is best known for his portrayal of Mr. Sulu in the acclaimed television and film series Star Trek. He’s an actor, social justice activist, social media mega-power, New York Times bestselling author, originated the role of Sam Kimura and Ojii-Chan in the Broadway musical Allegiance, and subject of To Be Takei, a documentary on his life and career. In 2015, Cosmopolitan Magazine named Takei “One of the Internet’s 50 Most Fascinating People.” Takei and his husband, Brad, were married at the Japanese American National Museum on September 14, 2008.