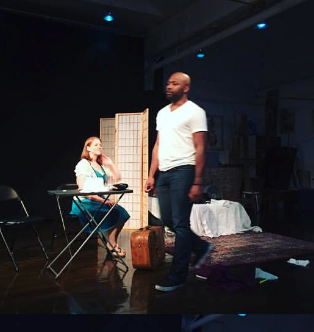 Dmae focuses on the Asylum lab, a place where professional actors and directors can explore classical theatre in a “gym”-like setting. It’s being developed by director Elizabeth Huffman. We’ll talk with Huffman and two actors in her Asylum lab actors Skeeter Greene and James Dixon and director Alana Byington.

Huffman hasÂ created an acting and directingÂ gym of sorts that fits intoÂ working actor’s and director’s schedules and budgets Each Monday she’s been holding the Asylum lab to work on monologue and scene study ranging from the Greeks to new works containing classical challenges such as poetic language, historical characters, revisionist plays, or cross-disciplinary works drawn from classical material. Â The actors and directors pay a nominal fee to cover rental of the theatre space while devoting their time to the training.

Huffman plans the Asylum as a launching pad for a series of readings and eventually productions of her new theatre company Chain Reaction.Â Now the 38 Asylum actors are ready to unveil their work with a two-day showcase.

Tennessee Williams at the Asylum,Â two Â evenings of scenes and speeches from 13 different plays and from Williams’ personal writings.

Tuesday, July 12th: “Bars & Verandas”
A Perfect Analysis of a Parrot, In the Bar of a Tokyo Hotel, Small Craft Warnings, Night of the Iguana, Suddenly Last Summer.

Huffman created her first classical theatre company in New York in 1985 called The Beacon Project. In production for five years and namedÂ â€œThe most exciting company to watchâ€Â by the New York Times, she designed costumes, acted in revivals of neglected classics & world premieres and made her professional directing debut withÂ The Revengerâ€™s Tragedy.

SheÂ relocated to Los Angeles in 1990 to play a recurring role on the TV soapÂ General Hospital and while there was invited to act and direct and then become artistic coordinator with the prestigious Classical Theatre Lab. SheÂ formed her own international theatre company ICAP THEATRE in 2005 comprised of more than 40 classically trained actors from around the world. For the next three years the company performed in Los Angeles and at festivals in Europe.

In regional theatres and internationally Elizabeth has acted in Â plays such as 9 Parts of Desire, Vanya & Sonia & MashaÂ  & Spike, Â Macbeth, Charleyâ€™s Aunt, Â King LearÂ and Â most recently acted in the solo show, We Made Bread, in San Francisco. In Portland she has acted with Artists Repertory Theatre, Profile Theatre and in the solo show, The Absence of Wanting at COHO. She will be premiering her new play The Re-Imagining of French Gray by the Displaced Woman this August, then traveling to perform it in several cities in Germany this fall. She recently completed a guest-starring role on The Librarians.

Huffman’sÂ Portland directing projects have earned her a total of 8 Drammy Awards so far. These include: Trojan Women, Oedipus the King, Oedipus El Rey, King John, Lion in Winter, November,Â The Ladies Man, Antony & Cleopatra,Â Mary Stuart and American Night, and she premiered her own original playÂ Bon ton Roulet at the Shakespeare CafeÂ for Fertile Ground Festival at Post 5, which she is working on this fall with the Bremer Shakespeare Company in Bremen, Germany.

Huffman is in the early stages of forming her own company,Â Chain Reaction Theatre.